A couple of fish, both 12lbs reported from Wyesham yesterday so perhaps a few are trickling in on the high tides.  Nothing other than that apart from a 3/4lb sea trout reported from the Tail of the Boat Pool on Golden Mile by Gordon Cramp - spinning.

Had a go at stuffing the big 34lb pike found dead at Whitney a week or so ago.  Big female huge with spawn which no doubt caused its death.   Bit of a messy job though!

Below is a picture of the eggs in the belly which filled the whole body.  One egg sack is in the picture , a similar one was on the other side.   Together they weighed 5lbs or so.  With the eggs so small one can only speculate at the number the fish contained.  Skinning went ok -hope to show the completed fish when it dries out.   Shows just what the Wye can still produce though heaven only knows how many fish it ate during it's lifetime. 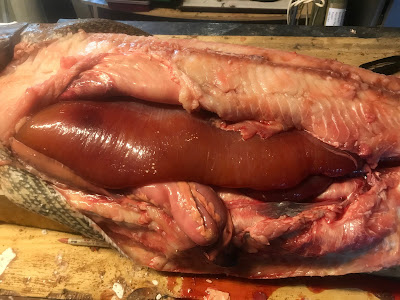