More heavy rain this morning and upper river is starting to rise again and still there seems no end in sight.  Might even get some snow on high ground too.   Depressing doesn't even come close!!!


Some pics of the lower river at Bigswier courtesy of Peter Wright;  Not a pretty sight. 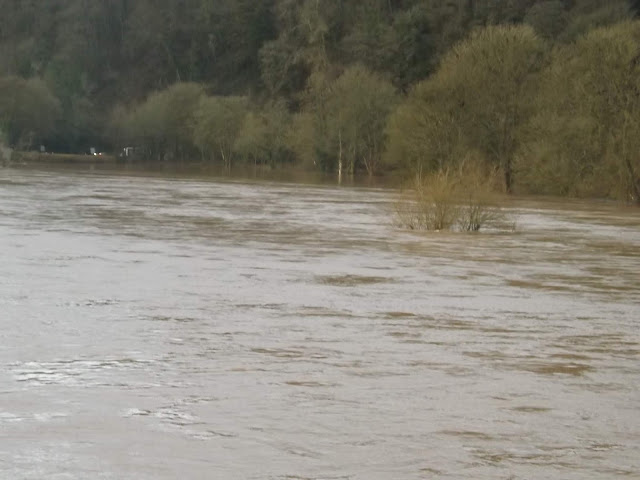 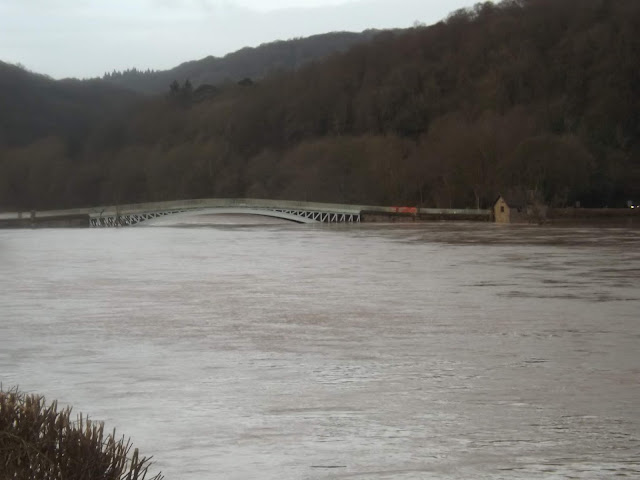 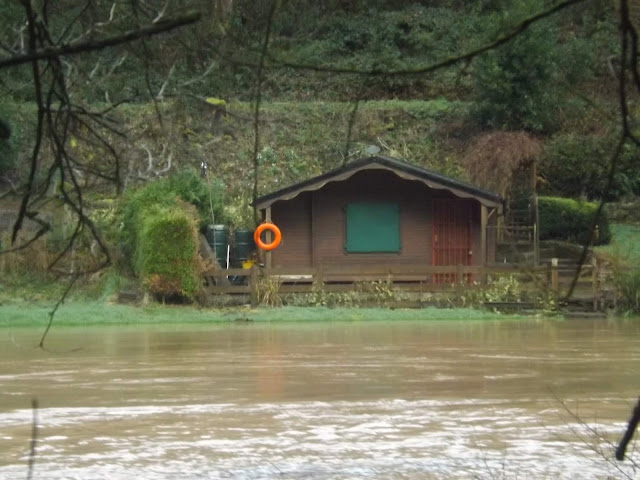 Yet again more overnight rain and another considerable rise in levels once again which could lead to more flooding.   Little prospect of any serious opening day fishing certainly on the lower river. 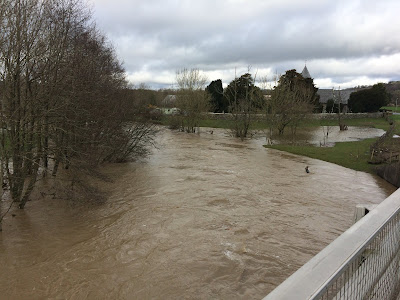 Was looking through some old document today and came across this sent to me some years ago by the sadly missed Stuart Jarvis of |Usk fame.
It lists the catches of the Llandeilo Club from 1956 to 1997 and illustrates starkly how catches have fallen over the years.
Handwritten on the right are some other scarcely believable catches from the Towy and the Tiefi.
Just imagine 32,100 Sewin from the Towy in ONE season and 3453 salmon.   Oh for the old days back again!!!!!   Sadly gone forever. 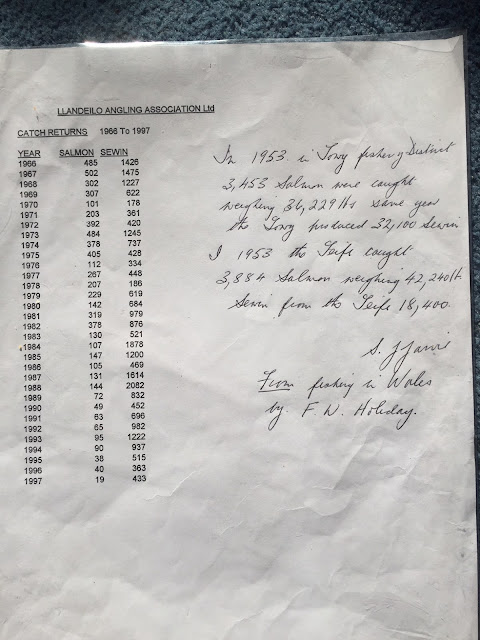 Yesterdays rise on the upper river was short lived and the river is now falling again though still high obviously and looks likely to remain so for some time with more rain in the offing.

Congratulations to Bigswier angler Geoff Handley for his part in the rescue of a woman from the river Wye earlier in the week.  Well done Geoff.


You may well have seen the WUF plan to try and alleviate severe flooding in the future or at least to
try and improve matters =mostly by  improving  soil absorption.   However I fear that the below statement makes a nonsense of the whole thing.  If the project was completed the amount of water it could store would be equivalent to little more than one days flow????


The Wye catchment covers an area of around 460,000 hectares. Much of this area’s soil has depleted organic matter, an important factor in how much water it can hold. If the organic matter of the soil improved by 1% in 70% of this area, around 64 billion litres more water can be stored in it.
The Environment Agency estimated that around 60 billion litres passed under Hereford Bridge yesterday, which saw the peak of the flood.

Despite the warnings not a lot of rain in the Wye catchment so far overnight and this morning so conditions should continue to improve.

LATEST   Sorry but you may not want to hear this.  Upper river is rising again from Rhayader downstream.

You might find the following interesting and well worth a contribution

River levels dropping everywhere in the catchment now and although further rain s forecast looks unlikely to be a the same intensity as before.


How did we manage I wonder;

No carbon rods, just cane or Greenheart no fibreglass either for some time...
Silk lines or basic plastic double tapers only.
No Spey Lines, shooting heads, Skagits and all the other ‘aids’ you have today.
Gut casts and then unreliable ‘Luron’ monofilament, no copolymer or fluorocarbon.
Thin latex waders with leather brogues if you were lucky – no breathables, no neoprene’s, no hi tech underwear..
Sweaty plastic waterproofs or leaky stiff Barbour jackets if you were lucky.
No large arbours, mid arbours with high tech drags fit to stop a runaway train.
Just simple click check reels with braided backing- a Hardy if you were flush enough.
No multi pocketed waistcoats dripping with accessories just a priest, eeek- and a gaff eeek or tailer eeek!
Proper flies on handmade hooks with not a Willie Gunn, Ally’s shrimp or Templedog in sight but probably a Jock Scott, Thunder and Lightening or Black Doctor.
Mostly singles or doubles only, trebles for tubes or Waddington only.
No dreaded Flying Cs or Rapalas just a wooden or metal Devon Minnow or a Spoon with a spiral or Wye lead.
Perhaps –horror of horrors, even a bag or worms or a prawn or shrimp or two just for a change.
We mostly killed the fish we caught –that’s what we went fishing for and carried them away in a woven rush bass. And yes we even sold them sometimes either for ourselves or perhaps our employer.
We didn’t need to be told to put all coloured fish back especially near spawning time or to perhaps stop when we had caught what we needed. We didn’t have the PC police looking over our shoulders and be regulated out of existence. We did however have a proficient bailiff force- remember them - that did its job when required and prosecuted poachers and protected the fish on the redds and made sure we were fishing legally

We didn’t have to go to Russia or Iceland or Norway to catch our fish in satisfactory numbers and sizes.

We weren’t the problem for the angler, fishing in a legitimate way never is a threat to salmon populations I believe. All the problems came later – and we all know what many of these are and which are debated endlessly in forums or elsewhere.
You may think of us as old gits and dinosaurs but I bet you envy what we had then and suggest you look elsewhere for your scapegoats for our present demise, despite the high tech graphs which might suggest otherwise.
You can spend your life on the river, day in and day, year in year out but you see nothing, know nothing, have nothing worthwhile to say it seems  . Better believe the wet behind ears young fishery ‘scientists’ with their pre conceived ideas, theories, graphs and computer models.   See where that gets you.   Oh yes we are seeing just that!  The beginning of the end.

New record highs for the lower Wye - makes you wonder how the small fish survive though not in the same league as those poor souls flooded out.    Will take some time to drop for sure. water in the fields everywhere.

Related Topics
There are two severe flood warnings - meaning a danger to life - and the River Wye has reached a record high in the wake of Storm Dennis.
Homes were evacuated on Monday night and the river's water levels at Monmouth reached 7.15m (23ft) by 08:30 GMT on Tuesday.
The last recorded highest level was in 2002 when it peaked at 6.48m (21ft).
More rain is forecast with a Met Office yellow warning issued for Wednesday and Thursday.
Monmouthshire council has set up an evacuation centre at the Shire Hall in Monmouth for residents.
Mariana Robinson, whose home looks out over Monmouth and the wider valley, said she could see homes, businesses and the rail line under water.
"It's frightening," she told BBC Radio Wales Breakfast.
Posted by Seeker at 10:28 No comments:

Well it arrived, dumped it's load and carried on leaving a trail of destruction behind it.  Nowhere seems to have escaped, Even my old stamping ground on the Teme at Tenbury had it's high street flooded.  never seen that before.   Record highs on many rivers but the upper Wye has dropped well and is now within it's banks.  Downstream its another matter.

Be sure to be big changes on some sections of river with not just silt and gravel in the pools but motor vehicles as well. Several floated off from Hay on Wye riverside car park.  Who's responsible for getting them out of the river I wonder.  Record levels on Usk as well with damage to Crickhowell old bridge which is closed.    Might even be more later in the week!!!!